A page from Teuta’s Journal.
January 25, 2004, was the day that my life took a 360-degree turn. John and I flew from Prishtina to Vienna and we just landed in Washington DC, Dulles Airport. I’m carrying a backpack that says, United Nation Mission in Kosovo and a black carry-on. I’m feeling stiff from an 11-hour flight. I’m kicking my heels because there’s not enough space to stretch while waiting in line for passport checks. There are two different lines for passport inspection: US Citizens, Global Entry Crew, Diplomats and the other one says, Visitors and Permanent Residents. 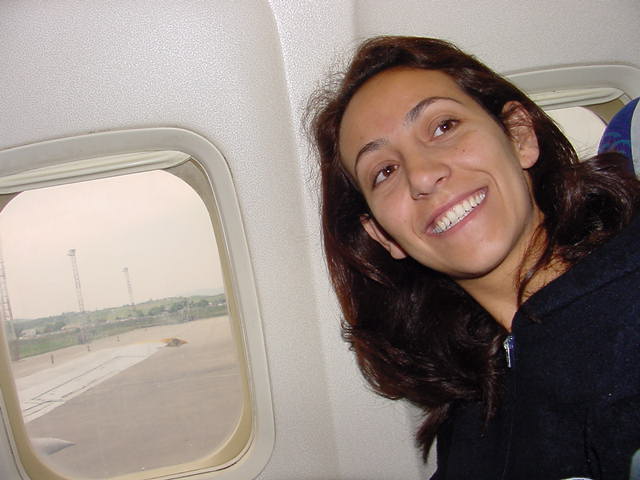 Teuta Shabani Towler on the airplane from Vienna to Washington DC.
I was happy to get out of Vienna not knowing what's waiting for me in the US.

John went on the US Citizen’s line and I’m on the Permanent Residents. His line is shorter and seems to be moving faster. I have a very bad feeling right now. I don’t like being separate from him. I’m worried about losing each other in this big airport. Neither one of us have cell phones. I have no idea how long my immigration process is going to take and I’m already very tired.  I keep looking at John on the other line until I no longer see him. I look around and there are people from all over the world coming to visit or permanently live in America. Some of them look very excited but most look tired.  A startling voice in my head said, “This is wrong!” I don’t have a single thought but tears are rolling down my face. I bent down pretending to look for something in my backpack and poured those tears in it. The line is starting to move again. I wipe my face, stand up and start walking a few more steps. The closer I’m getting to the immigration office, the blurrier my future seems to be. I’m having a really bad feeling that I’ve just made the biggest mistake of my life. I try to avoid negative thoughts and bring my attention to the present moment. There are all kinds of smells around me, pollution is the most dominant one. I guess from all the airplanes and machinery, I tell myself. Sweaty travelers, a baby with a stinky poopy diaper but poor mom can’t do anything about it right now. A lady pulls out her perfume from the bag and sprays herself. That was nice but some people are closing their noises which is odd to me because the perfume is much more pleasant than all of the other smells. I take my jacket off because I am getting hot. Within a minute, I realize I’m smelly too. I put my jacket back on to cover up the smell. The jacket feels familiar and comfortable. The jacket doesn’t just help cover my stink, it helps cover my emotions as well. In a room full of people, I feel extremely lonely. I cross my arms and hug myself fighting tears.

And for the next 13 years, that’s what I did, covered my emotions, and hugged myself.